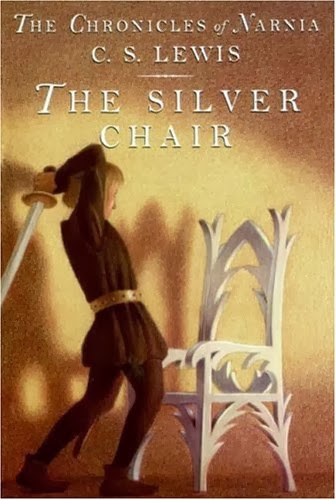 Not long ago, I read C. S. Lewis' book The Silver Chair and stumbled across some pretty powerful symbolism: the Green Witch and the Silver Chair are symbols for addiction.

In this chronicle of Narnia, two children—Eustace and Jill—are sent by Aslan to help rescue Rilian, a prince who has been put under the spell of the Green Witch.

Prince Rilian first encounters the Witch (although he doesn't know it) when she appears in the form of a snake. The snake is described "great, shining, and as green as poison." The snake kills Rilian's mother.

"The Prince took his mother's death very hardly, as well he might," and Rilian frequently rode out into Narnia, seeking to kill the beast and avenge his mother's death. As time goes on, people begin to notice a change in Prince Rilian: "There was a look in his eyes as of a man who has seen visions."

It is later revealed that Prince Rilian had given up his hunt for the snake and was being enchanted by the Green Witch. "She was tall and great, shining, and wrapped in a thin garment as green as poison. And the Prince stared at her like a man out of his wits."

The Witch eventually captures Prince Rilian and puts him under a spell. When Eustace and Jill discover him (in a dark, underground city many miles below the surface of the earth) they describe him as handsome and well-natured, but they also notice that there was "something about his face that didn't seem quite right." Because of the spell, neither the children—nor Rilian—know who he is.

As they talk, Rilian is laughs incessantly, finding even the darkest subjects (like war and death) to be humorous. He then tells the children that his Queen (the Witch), has the power to free him from an enchantment. Said he: "Every night there comes an hour when my mind is most horribly changed, and, after my mind, my body." He then praises the Queen, saying: "Is not that a lady worthy of a man's whole worship?"

Later that evening, Prince Rilian is bound to a silver chair. According to the Queen, Rilian being bound to this silver chair will keep him from hurting himself and others. In reality, the silver chair only reinforces the spell that has been cast on the Narnian Prince.

As he sweats and struggles in the bonds of the chair, Eustace and Jill decide to unbind him. Once free, Prince Rilian "crossed the room in a single bound, seized his own sword...and drew it." He then cleaves the silver chair in two. "The silver gave way before its edge like string, and in a moment a few twisted fragments, shining on the floor, were all that was left. But as the chair broke, there came from it a bright flash, a sound like small thunder, and (for one moment) a loathsome smell."

Prince Rilian then turns to the children and they notice that "the something wrong, whatever it was, had vanished from his face."

The realization that the silver chair could represent addiction fascinated me. My work at the Anasazi Foundation (a wilderness therapy program for struggling youth), and many of my own personal experiences have brought me face to face with the horrors and anguish of addiction. C. S. Lewis did a masterful job in illustrating the journey of an addict in The Silver Chair.

Luckily, there is always way out. Just as Aslan sent Eustace and Jill to find and save Rilian, God also sends people and positive influences our way to help us remember who we are and to help us come out of darkness and into light.

In order to recover from addiction, we first need to admit what we're doing is wrong then reach out and develop meaningful relationships with God and with others. We need to rid ourselves of what is binding us, or holding us back (the silver chairs of our lives) and commit to walk forward into the light.

As we do so, life will become more meaningful as we begin to see it more clearly.

As Prince Rilian said: "For now that I am myself, I can remember that enchanted life, though while I was enchanted I could not remember my true self."