I wrote an article today on how Ben Franklin's copper cents not only make common sense, but are worth more than all the gold in Fort Knox. You can read it by clicking here.


Posted by Seth Adam Smith No comments: Links to this post

"The man who fears no truth has nothing to fear from lies." - Thomas Jefferson

I heard that quote today and I think it's one of the most fascinating things I've ever read. To what extent do I fear the truth?

...something to consider very deeply....
Posted by Seth Adam Smith No comments: Links to this post

After visiting family for Thanksgiving, I feel I can somewhat relate to Michael Bluth from Arrested Development (my absolute favorite TV show).

As soon as my wife and I opened the front door, my brothers unleashed a wave of sarcastic comments that refused to ebb until everyone had been sufficiently and thoroughly doused. We came for pie, but received a cornucopia of quips, jokes and humiliating reminisces—turning our family together time into a verbal battle for honor, glory and survival.

Lest you think that I didn't enjoy my time with my family, let me assure that I had a wonderful time. Sarcasm is the native language of my family and it's how we communicate our love for each other (so yes, this year there were many expressions of love).

Just wish we could have tried something from the cornballer...
Posted by Seth Adam Smith No comments: Links to this post

The End of the Twinkie, The Beginning of Zombieland

Well, I'm sure that most of you have already heard the news that Hostess, the lunch-time delight of every American's childhood, is going out of business.

Not only will future generations lose the most epic, unhealthy snack of all time, but road-trippers across America will lose one of their most faithful companions. Truly, the loss of the Twinkie marks the beginning of the end (which is still on for December 21, right?) and brings us closer transforming the plot of the movie Zombieland into a sad reality.

Posted by Seth Adam Smith No comments: Links to this post

This page has moved! Please click HERE to see the best wedding announcement ever!!

Posted by Seth Adam Smith 14 comments: Links to this post

The Power of Encouragement

Lately, I've been impressed by the power of encouraging someone---by using our words to inspire someone to believe in themselves.

While I was driving from San Francisco to Utah this weekend, I finished listening to How to Win Friends and Influence People. In it, Dale Carnegie shares this touching story:

"In the early nineteenth century, a young man in London aspired to be a writer. But everything seemed to be against him. He had never been able to attend school more than four years. His father had been flung in jail because he couldn't pay his debts, and this young man often knew the pangs of hunger. Finally, he got a job pasting labels on bottles of blacking in a rat-infested warehouse, and he slept at night in a dismal attic room with two other boys - guttersnipes from the slums of London. He had so little confidence in his ability to write that he sneaked out and mailed his first manuscript in the dead of night so nobody would laugh at him. Story after story was refused. Finally the great day came when one was accepted. True, he wasn't paid a shilling for it, but one editor had praised him. One editor had given him recognition. He was so thrilled that he wandered aimlessly around the streets with tears rolling down his cheeks.

"The praise, the recognition, that he received through getting one story in print, changed his whole life, for if it hadn't been for that encouragement, he might have spent his entire life working in rat-infested factories. You may have heard of that boy. His name was Charles Dickens."

Think of how many millions of people have been inspired by Charles Dickens....but also think about the one person that inspired Charles Dickens.
Posted by Seth Adam Smith 2 comments: Links to this post

The White Wolf vs. The Black Wolf 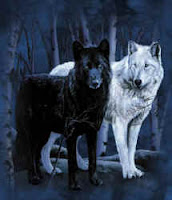 Some say that within every man and woman there is a white wolf and a black wolf.

The white wolf is gentle and loves mankind. It seeks to help others and lives in harmony with the wilderness. It does not take offense and only fights when it is right to do so and in the right way. Its walking upon the earth is peaceful.

The black wolf is fierce and full of enmity towards mankind.  It seeks to tear others down and destroy all in its path. It is full of hatred and fights with everyone. Its walking upon the earth is war-like.

These two wolves live inside of each of us and both try to dominate our spirits.


The wolf that wins is the one that we feed.
Posted by Seth Adam Smith 2 comments: Links to this post

My fiancée, Kim, mentioned something the other day I've thought about ever since. She said "listen to life" and "gather stories to share with others."

Wherever I go, that's something that I love to do: listen to life.

On long walks in Nauvoo I was fascinated by the life of Joseph Smith, his last dream, and the faith and determination of the early pioneers. I would gaze at the Mississippi river for hours and revel in the shades of a red sunset and the sounds of a steamboat.

While living in Nakhodka, I was completely enraptured by the culture and feel of that small Russian harbor town. Whenever the leaves change color, and the autumn breeze picks up, my soul drifts back to the streets of Nakhodka and I can almost sense the smells, the sights and the sounds of that town. Years later, my attachment to Russia would beckon me to read some of the greatest literature ever written: Dostoyevsky, Tolstoy and Chekov.

Later in life, I gathered many other things through listening: a profound appreciation for the Iliad, the Odyssey, and equally epic Civil War stories, while living in Virginia. A deep, almost mystical, and soul-stretching love and respect for Native American culture, history and legends while working at the ANASAZI Foundation. Overwhelming admiration for the Russian people and the stories of their victory during World War II.

Interviewing and learning from sculptors, artists, musicians, philosophers, CEOs, teachers, politicians and other remarkable individuals without titles to their names.

And the stories that I have gathered. The people whom I admire! The incredible story of Joshua Chamberlain and his victory at Gettysburg. The epic endurance and eventual triumph of the Soviets during the siege of Leningrad---through music. Benazir Bhutto, the first female Prime Minister of Pakistan. Leo Tolstoy, the man who inspired Ghandi through his writings and many, many more!

Add to that stories from the lives of my friends; people who have overcome overwhelming odds and are now giants among men.

And the literature I have read. Oh, how the world is filled with beautiful and inspiring words! The Great Divorce by C. S. Lewis, Crime and Punishment by Dostoyevsky, Joseph Smith's Last Dream by W. W. Phelps, The Seven Paths of the ANASAZI Way, A Christmas Carol by Charles Dickens, The Shack by William P. Young, The Alchemist by Paulo Coelho, Nathaniel Hawthorne, Leo Tolstoy, Mark Twain, Neal A. Maxwell, David McCullough, William Shakespeare, Plato and so many others!

Life is filled with so many wonderful things...if only we listen for them.

That, perhaps, is a long-winded way of telling you that I'm adjusting the theme of my blog---and my writing, for that matter. I'm going to listen more to life and share what I hear with you. I want to take stories, ideas, and accounts from all around the world and share them with you in a meaningful way. I want whatever I write to be inspiring and influential.

There is so much to learn in listening to life.
Posted by Seth Adam Smith 3 comments: Links to this post