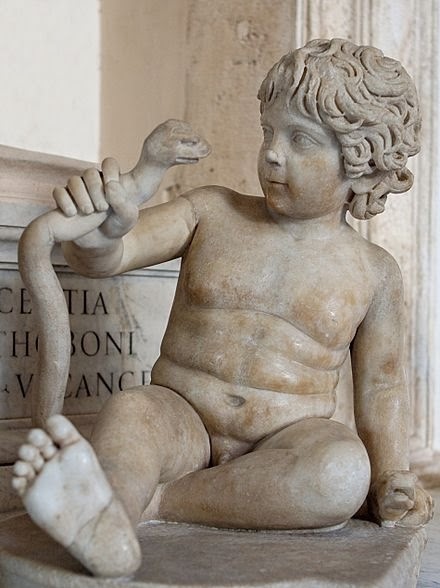 I love the play Cyrano de Bergerac. It's a wonderful love story told in beautiful, passionate prose (and it's also the inspiration for the movie Megamind—another favorite of mine—but this isn't the place for that).

Not long ago, I was reading Cyrano and I came across a rather intriguing line:


This new-born babe, an infant Hercules! Strong enough at birth to strangle those Two serpents – Doubt and Pride.

I thought about that for a while. Two serpents: Doubt and Pride. I love symbolism in Greek Mythology, yet I had never heard these serpents being referred to as Doubt and Pride.

But come to think of it, the serpents of doubt and pride have a close connection with another serpent—the serpent. For it was Satan who appeared to Adam and Eve in the form of a snake, tempting them to eat the fruit of the tree—contrary to the commandment of God.

In tempting them to eat the fruit, he was tempting them to doubt God. Doubting God is only possible when we think that God is wrong and that is the very height of pride: to be believe that we know more than God.

And when you think about it, doubt and pride are the only two things that keep us from Heaven. If we doubt God's commandments, we will not keep them. If we think we know of a better road than His strait and narrow, we will forsake His road in favor of ours.

So Cyrano was right to be amazed at the strength of Hercules. As a babe, he was able to strangle both doubt and pride. The fact that Hercules defeated those two serpents was but a foreshadow of his eventual triumph on Mount Olympus (Heaven).