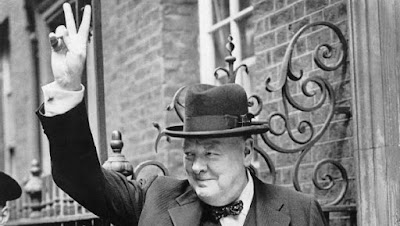 My guide through life has always been Sir Winston Churchill (1874–1965), the Prime Minister of the United Kingdom during World War II. His active and steadfast resistance to Adolf Hitler, along with his vehement refusal to even consider defeat, helped inspire his nation to victory against Nazi Germany. His strength of character and his determination to never give up—even in the most dire circumstances—has made him one of the greatest leaders the world has ever known.

Churchill was also a very funny man. As some of you are aware, Winston Churchill and President Roosevelt were actually very good friends. Once, while Churchill was staying at the White House, President Roosevelt decided to stop by Churchill’s room. The Prime Minister, who had just finished taking a bath, was pacing back and forth in his room—completely naked. When Roosevelt rolled into the room and saw Churchill in the buff, Churchill calmly replied, "You see, Mr. President, I have nothing to hide from you." [Source: TIME]


But there was something that Churchill did hide from the world—he struggled with what he called “the black dog” of depression. Researchers and biographers have since diagnosed him as someone who struggled with major episodes of depression. Of Churchill’s battle with depression, psychiatrist Anthony Storr said this: “Only a man who knew what it was to discern a gleam of hope in a hopeless situation, whose courage was beyond reason, and whose aggressive spirit burned at its fiercest when he was hemmed in and surrounded by enemies, could have given emotional reality to the words of defiance which rallied and sustained us [during World War II].” [Source: NAMI]

The full weight of Europe on his shoulders. He was, in many respects, a lone man standing against the full onslaught of Adolf Hitler—one of the most evil men in history. In studying Churchill’s life—his victories and defeats, along with his emotional obstacles and personal challenges—I am perpetually amazed by his indomitable will to fight his way forward. In a speech delivered to the House of Commons on June 4, 1940, Churchill rallied his beleaguered nation with these words:

Consider the context of these words. Not only was Churchill leading the charge against Nazi Germany, he was simultaneously leading a personal charge against his own depression. With this in mind, the following phrase (one of his most famous quotes) is given even more power and meaning:

While writing about depression, I have felt discouraged many times. The process of creating books and blog posts about it has caused many different thoughts, feelings, and experiences to resurface. Some of these have been good, but most of them have been very difficult to recall. I am often confronted with feelings of despondency, depression, and insecurity. After all, I begin to think who am I? Who am I that the world should care what I have to say? But in these moments of self-doubt, I have often looked at a photograph in my office of Winston Churchill. He doesn’t look back at me. Instead, he looks forward, into some distant horizon—as if to say, “Never give in. Keep moving forward.”

Please consider this incredible irony: Winston Churchill and Franklin D. Roosevelt are two leaders who faced tremendous challenges. One of them struggled with the darkness of depression; the other was bound to a wheelchair. Had they grown up in Nazi Germany, Hitler would have had both men exterminated for their imperfections. And yet, these two men—these two imperfect people—moved forward, and together, they defeated a darkness which had swept across Europe.